When veteran teacher, Bryan Sanders, stepped onto the stage to give his EdTalk at Loyola Marymount University, he thought he knew what to expect. Since 1997, Bryan has stood in front of classroom after classroom in Santa Monica and now Culver City, Calif., where he works to inspire his students and peers to “create boldly.” 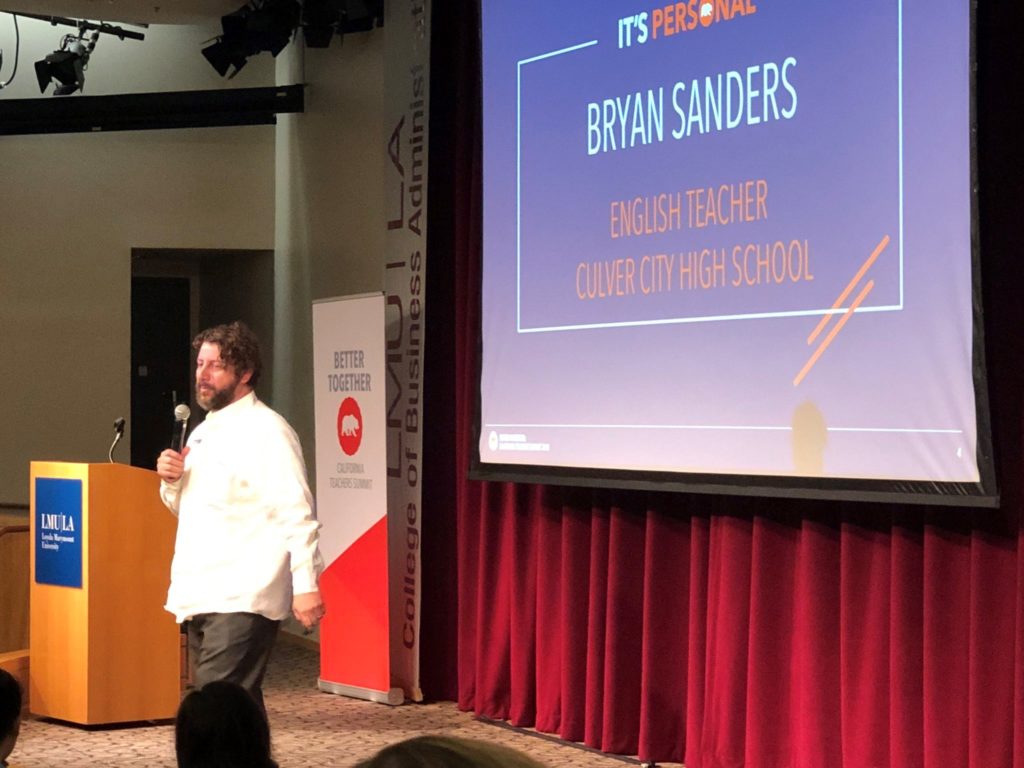 But as he looked out on the rows of new teachers, eager to learn how to bring technology and the arts into their own classrooms, Bryan became overwhelmed with emotion. Just before taking the stage, Bryan had attended a session for first year teachers, where 40 new teachers had turned to him for guidance. Now, hundreds more were looking for the same.

“I saw my teaching life flash before me,” Bryan says. “It was exhilarating and emotional, because 20 years ago, I wouldn’t have been up here talking, I would have been one of those audience members.”

Speaking on the EdTalk stage and in EdCamp sessions left a powerful impression on Bryan. A National Board Certified Teacher who is now finishing up his doctorate degree in Educational Leadership for Social Justice at LMU, these experiences showed Bryan just how far he’s come as an educator. Building on this year’s Summit theme, “It’s Personal: Meeting the Needs of Every Student,” a visibly-moved Bryan told the crowd how to amplify student voice and inquiry through educational technologies.

“I didn’t know that was going to happen to me on stage, but that physical proximity of seeing and feeling creates a different level of human interaction that you can’t get from tweeting or writing blog posts,” Bryan says. “That’s what I love about the classroom, that physical closeness creates a new narrative every time we meet.”

Born and raised in Santa Monica, Calif., Bryan grew up with a “fire in his belly” to fight for racial and social justice. Seeing this spark in him, one of his mentors helped mold the 23-year-old Bryan into a social justice educator he has become – and the rest, as they say, is history. He taught English for twenty years at Santa Monica High School and New Roads High School, and has now joined the faculty at Culver City High School – but his impact goes beyond essays and sentence diagrams. Bryan worked hard alongside his peers and administrators to break up the “two-school phenomenon,” which was tracking students based on race and class, rather than cultivating students’ diverse talents and strengths outside the standard curriculum.

“Teaching isn’t just teaching, it’s about transforming the world through the lives of students who otherwise wouldn’t have those opportunities,” Bryan says. “We were getting brilliant ideas from students with Ds and Fs in low level classes, yet they weren’t offered the same opportunities as their classmates with higher socioeconomic status.”

Bryan is not a ‘test answers at the back of the book’ kind of teacher. He saw the potential to bring Santa Monica High School’s diverse student body – nerds, rappers, storytellers, musicians, journalists, and comedians – together under a common goal: a school radio station. What started as a passionate pursuit in the corner of his English classroom quickly evolved into an independent study course that could count towards students’ transcripts. They even received a $5,000 check on the air from Big Boy himself at Power 106, an FM radio staple in Los Angeles.

“A neglected storage closet had become a cave of wonders,” Bryan wrote in a recent blog post about the radio station. “It was a passionate pursuit from all the students and they were truly better together — a diverse group of students that needed a common goal.”

Bryan’s radio experiment has a lesson in it for teachers, too. Because like their students, teachers truly are better together. Since the Better Together: California Teachers Summit on July 27, Bryan has continued to share and inspire bold and imaginative ideas via the Summit’s Twitter Chats, including the most recent “Back to School: Putting Your Summit Learnings into Practice” Twitter Chat on Aug. 6.

Bryan Sanders was one of 11,000 teachers who participated in the fourth annual Better Together: California Teachers Summit in person and via the Facebook Livestream on July 27, 2018. Check out this recap video to learn more about this powerful network. And join in the conversation by following Bryan Sanders @nayrbgo and @CATeacherSummit using the #BetterTogetherCA. The next Twitter Chat, “Building Authentic Relationships with Students,” is scheduled for Sept. 17 at 7 p.m.